I completed a fun CSP bypass recently and wanted to share my solution.

Itszsn tweeted out a CSP bypass challenge, and I wanted to see if I could solve it.

If you are not familiar with CSP, then I recommend you check out this page.

For another good example of a bypass, check out this Portswigger post.

I haven’t run across a lot of situations that I could bypass CSP before, so this was 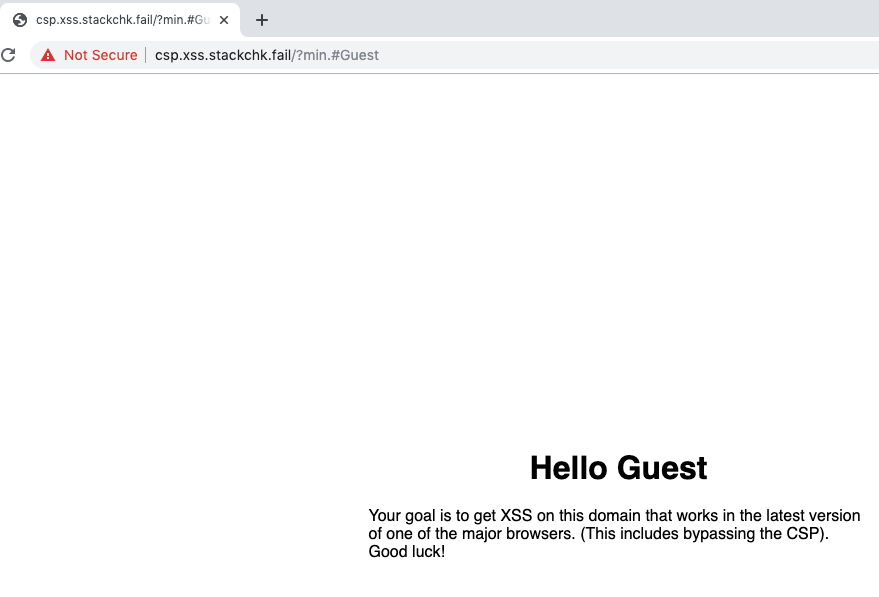 You can find the HTML for the page below, although there is nothing interesting other than the CSP header.

The app.js file had the actual injection point, which looked to be the name variable.

First, I modified the URL, to verify that content was changing as expected.

Next, I tried a basic XSS payload, to see if the CSP would block it.

As there was no frame-src in the directive, the default-src policy blocked this.

After looking at the JavaScript file again, I realized that I could import a different file from https://code.jquery.com via the min parameter.

In this case, I was able to import the jQuery 1.10.2 library via directory traversal.

Using this older jQuery library, I bypassed the CSP and got my XSS payload to fire!

You can find the HTML for the exploited page below.

The reason for this bypass was the parseHTML method of the older jQuery library. For more information, you can check out the following issues.

As you can see, the alert made it to the vulnerable parseHTML method, bypassing the CSP.

This was a fun challenge, and I was surprised when I solved it so quickly.

I haven’t had a case where I could exploit the parseHTML method before, so it was good to see it in action.

While I did not use it during this challenge, I thought about the older library because of Retire.js.

Let me know if you run across any other XSS challenges or filters that I should look at!

I also have a post coming for the most recent Intigriti XSS challenge, so stay tuned for that as well.