WEP Cracking with Aircrack-ng in Kali

While I wasn't able to find any in my neighborhood, I setup a demo AP for some WEP cracking at home.

For those of you that didn't know, I recently picked up a new alfa card, so it was time to give it a test drive.

First, I setup a 2nd SSID on my AP that would support WEP, and generated a random 128-bit key.

Once I configured the AP, I ran airodump to find the new network. Note that the encrypt flag will filter out my results, and only show me WEP networks.

After I found the new SSID, I restarted my monitoring interface on channel 1.

Once the monitoring interface was back up, it was time to test packet injection.

With packet injecting possible (at a 100% rate), I started airodump again to begin capturing IVs.

The next step was to perform a fake authentication with the AP. The reason for this is that the AP will not accept packets from a MAC address that it does not already recognize. Since I do not know the WEP key yet, aireplay can fake an authentication for me.

Once the fake authentication was complete, I was able to start generating traffic. In this case, I used aireplay in ARP replay mode. This will allow aireplay to listen for ARP request packets, and then inject them back into the network. This will allow us to obtain a lot of IVs in a short period.

After awhile (around 5000 data packets), I tried to crack the key. As you can see, this did not work (mostly because I set a random 128-bit key to start). That said, aircrack will retry the attack every 5000 IVs until it is able to crack the key. 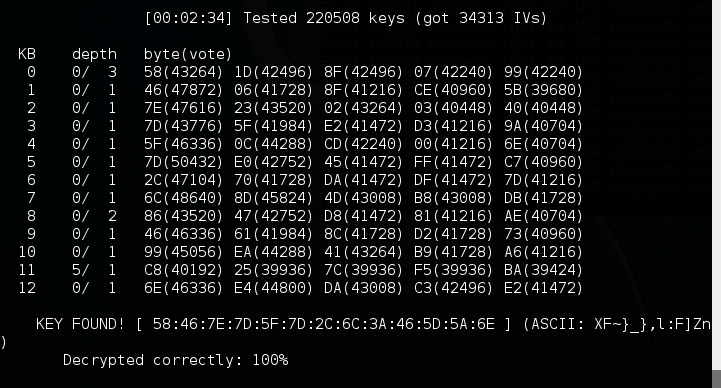 To verify the key was correct, I attempted to authenticate using the networking UI. 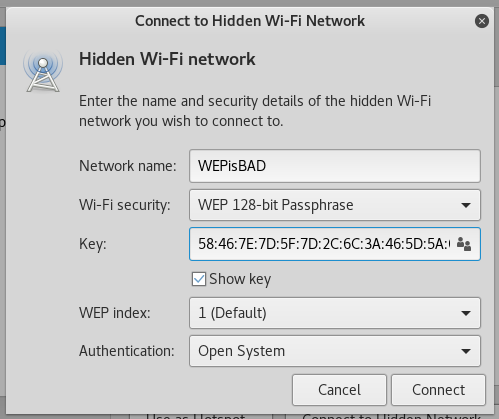 After a few seconds, I connected, and iwconfig showed my access!

While WEP cracking is a little less relevant nowadays, it was still a fun exercise to try out my new toy. For more information about this attack, and many more, I recommend the aircrack wiki.