I was recently playing around with the ability to create a WiFi QR Code, and I wanted to share how easy it is.

I was looking for some decoration ideas and I stumbled across a method to create a QR code for a wireless network.

I'd never done it before, but it seemed super straightforward. That said, I wanted to keep everything local, so I decided to use qrencode.

I'm still torn between 3D printed coasters and a print on the wall, so please chime in!

Installing libqrencode is easy, as it is in the apt repositories.

Once I finished the install, I verified that I was able to run the qrencode command.

With the library and application installed, it was time to create my (test) QR code!

To do this, I ran the qrencode command, with a type of SVG, an output file, and the input data for my test access-point. As you can see, the format is "WIFI:S:

After I ran the command, I opened the file to verify that qrencode generated the image. 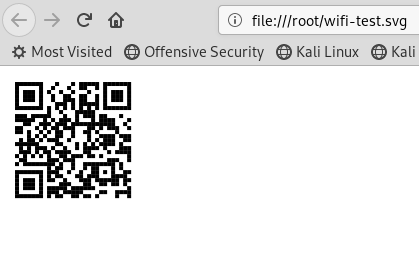 With the code created, I used the QR & Barcode Scanner app on my Android device.

As you can see, the code scanned properly, and I was able to connect to the network!

While this was easy enough, I think it will (eventually) make a fun decoration around my house!

This is also a good point for me to start modifying my wireless setup. I want to have a "guest" network, that this code would be perfect for, a personal network, and an IoT/device network. I may also setup RADIUS eventually, but that's further down the line.

If you have suggestions for 3D printing these into coasters, then I'd love to hear them.