There was an OSINT + custom cryptography challenge during the BSidesRDU CTF this year, but no one (else) was able to solve it from start to finish.

While most of this challenge was Open-source intelligence (OSINT) based, I’m most proud of my crypto solution.

There was nothing there, so I decided to search Twitter for EverSec in general.

This brought me to the r3tsuk0_ timeline, and the following tweets. 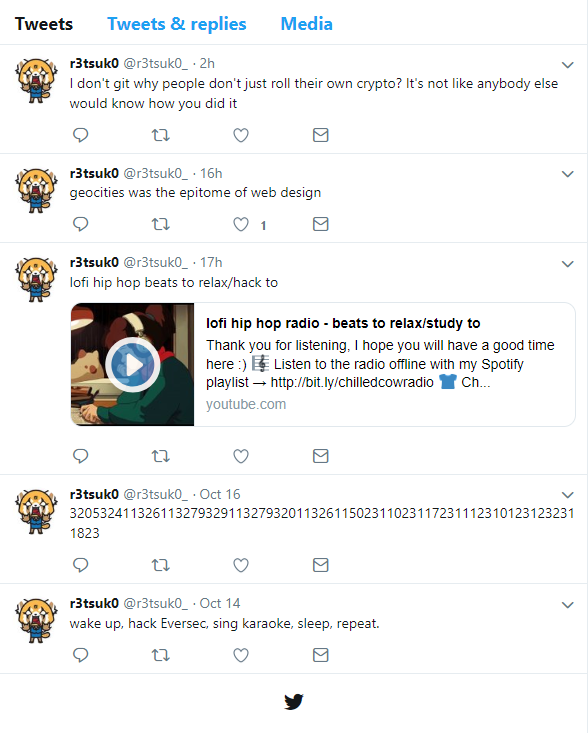 While custom cryptography sounded interesting, there was still another flag or two on the OSINT side.

To Understand the Future, We Have to Go Back in Time

While Google was no use, I did have some luck with the Wayback Machine.

When I searched for the archived pages under that URL, there was one result.

Viewing the deleted tweet gave me another flag, and a pretty cool challenge!

With the Twitter part of the OSINT challenge completed, I moved on to the cryptography part.

First, I used some professional Google skills (removing the underscore from the username) to find r3tsuk0’s GitHub profile.

The only repository on the account was encrypt, so this was likely the custom cryptography challenge.

Note that there was a reverted commit that had one more flag in it.

First, I grabbed the encryption routine, and took a look at it.

While this is fairly straightforward, I will break down the encryption step by step.

In this case, the output string calculation would look like this through the first loop:

With this in mind, I knew that the difficulty would be when the string reverses. While most characters would cause the cipher to store a 2-digit number in ‘o’, some could cause a 3-digit number.

This may not have mattered for this specific input, but I wanted to solve for any if it came up again.

In this case, I designed a fairly elegant solution, that didn’t take much actual cryptanalysis.

In the end, this reverses the entire encryption algorithm from before, with a quick brute-force step to account for the warning above.

If you are not familiar with Python, then I will break down the steps for you.

As far as the brute-force step, this is really where my solution is elegant. In the case where the input was only a 2-digit ascii character, then grabbing three characters ends up with a 2xx or a 3xx, due to the cipher concatenating with “23”. There are no printable characters in the 200-399 range, so we can safely assume that a 2-digit solution is safe here.

When I ran my finished script, I received the last flag!

While most of this challenge was the OSINT, I really liked the crypto solution.

This was a bit heavier on the programming, rather than crypto, side in the end, which is likely why no one solved it completely.

That said, I was glad that Steve pointed this one out, and I had some fun with it.