With the busy season and holiday traveling, I figured that a lighter post about my new battlestation was in order!

I have complained about my desk situation for over a year now, but I finally decided to change it up.

After some help from Steve, r/battlestations, and some others, I have a better setup now.

My original setup was my personal desktop, two monitors, and keyboard + mouse on my desk.

Unfortunately, this left no room for my work setup on my desk. This meant that I’d work from home with my chair facing away from my desk, my laptop on my lap, and my feet on the couch. Not the most ergonomic, comfortable, or productive setup.

With that in mind, I picked up the following pieces, and began to set up a new desk.

Assembling the mount was fairly straightforward, although it took plenty of blood, sweat, curses, and tears.

I think it would have been easier to assemble somewhere else, and then move it to the desk. That said, I didn’t have enough room anywhere else, and my stubbornness pushed through.

Once I assembled the arms, I took the stands off my current monitors. 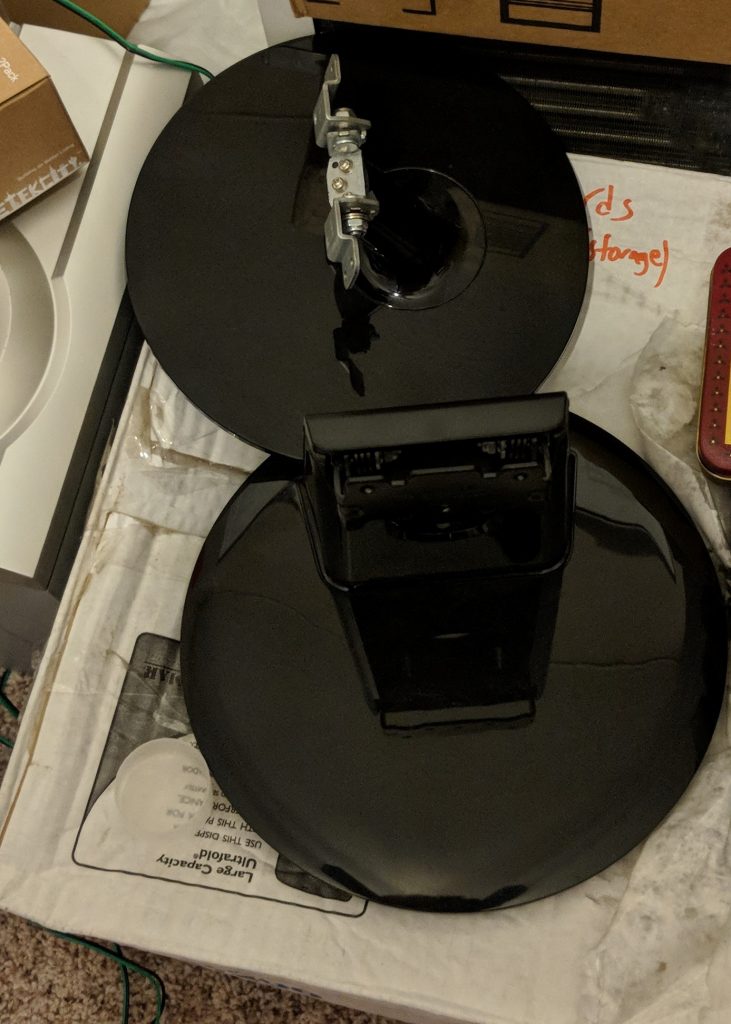 Leaning over the desk, screwdriver in hand, I eventually got my first two monitors mounted. Again, while it would have been heavy and unwieldly, I should have done this elsewhere. 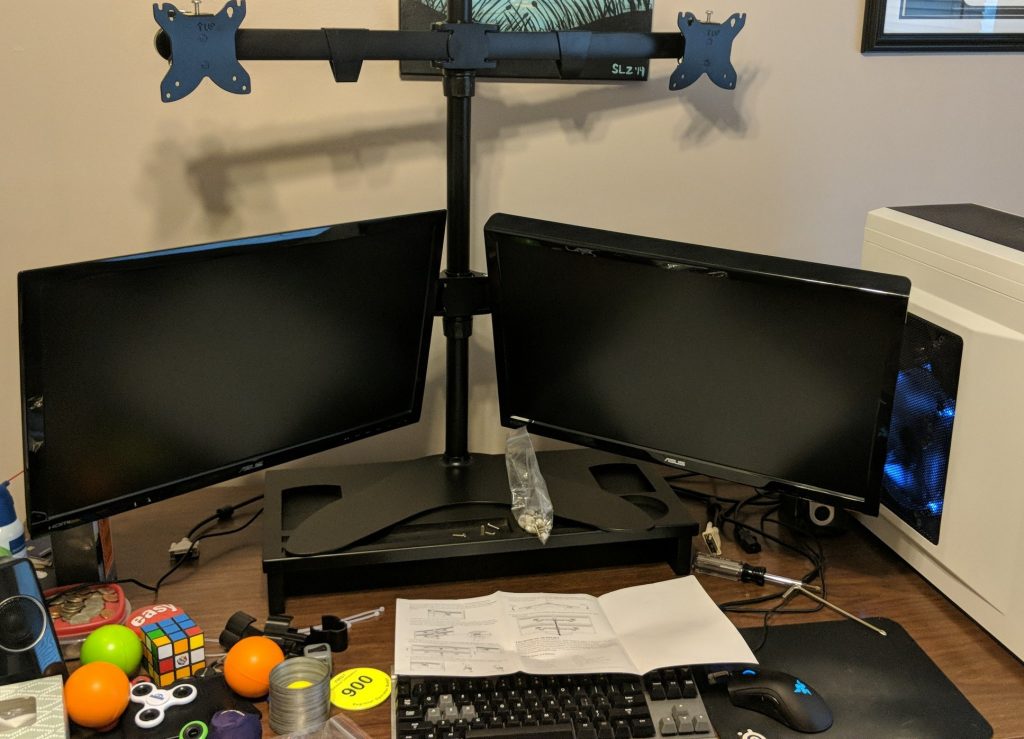 With a quad-monitor setup, I was also able to finally unbox the monitors that work sent me when I started! 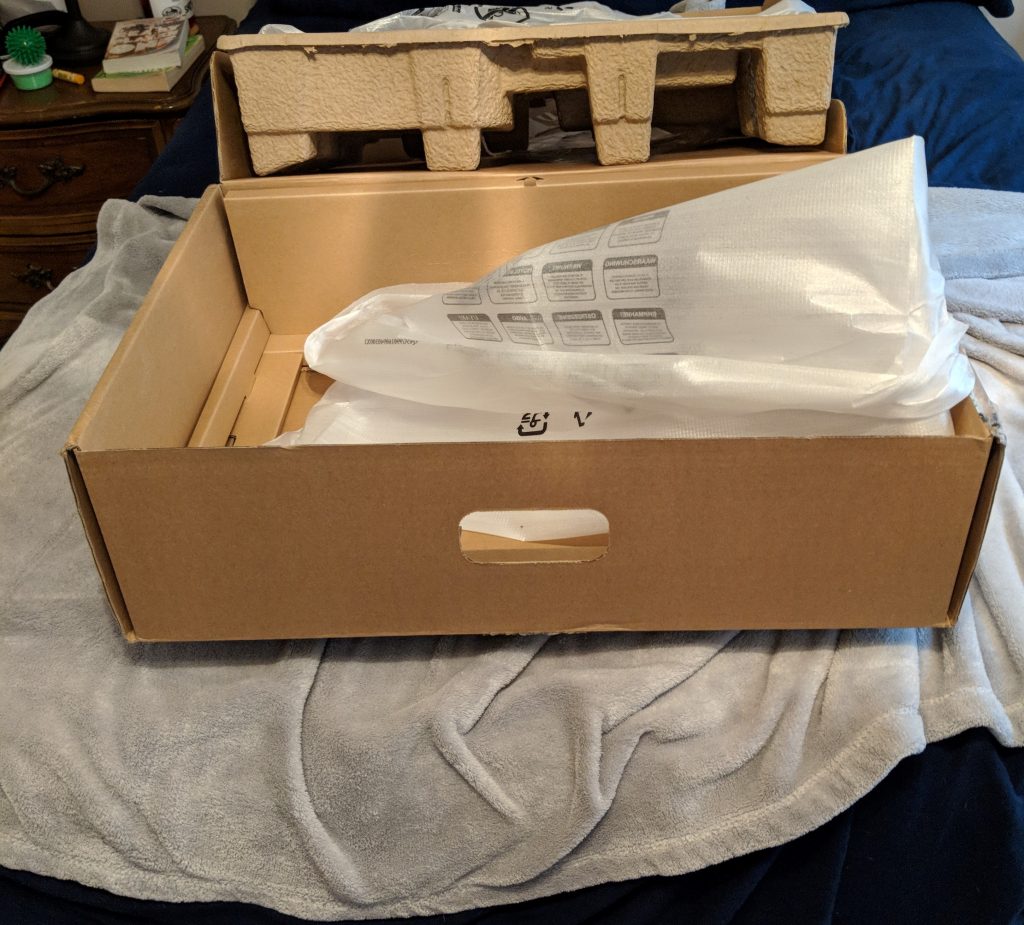 These two monitors were even harder to mount, but I eventually got the first one on. 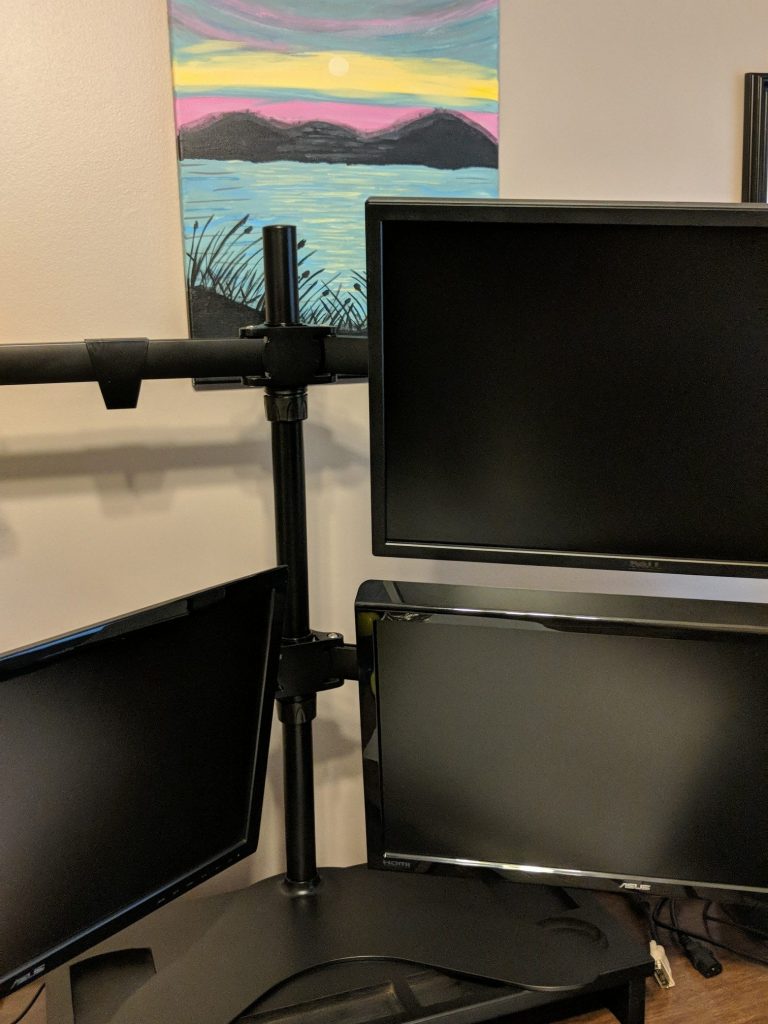 With a little more time and effort, I got the fourth monitor on there as well. 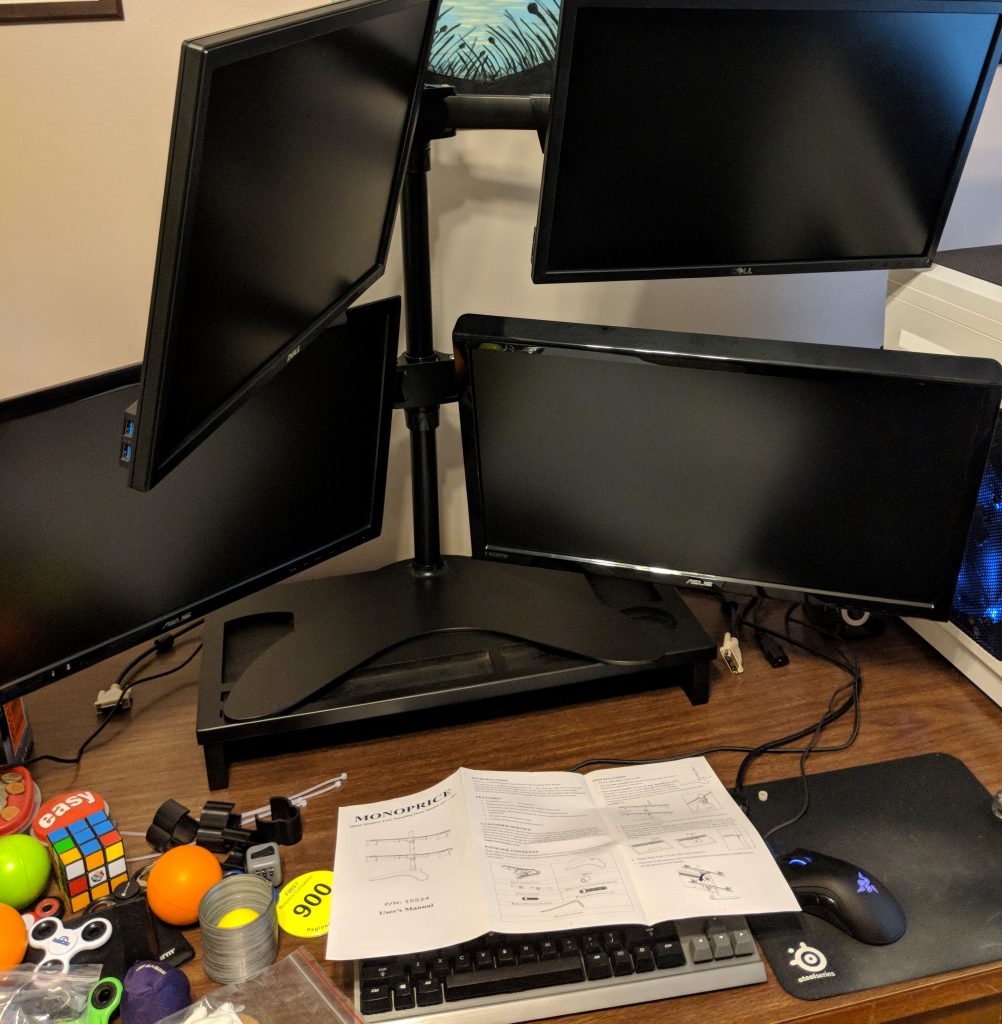 The riser looked great, and was able to hold the weight of everything with no problem! 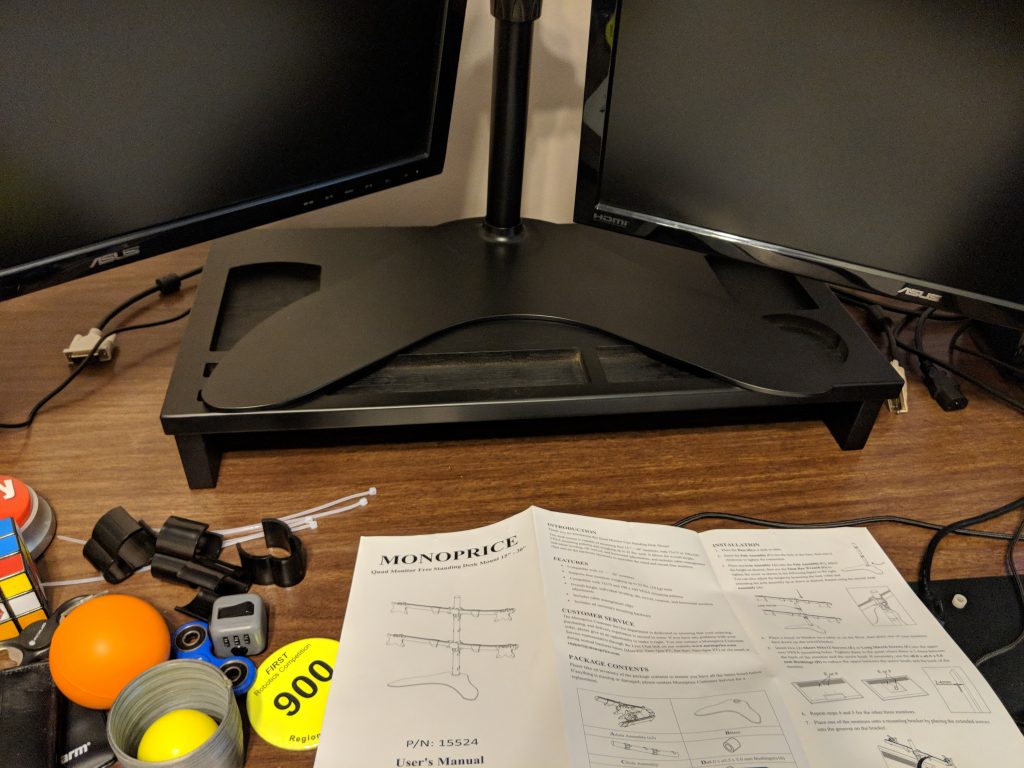 Of course, no build is complete without a nice pile of (now useless) boxes. 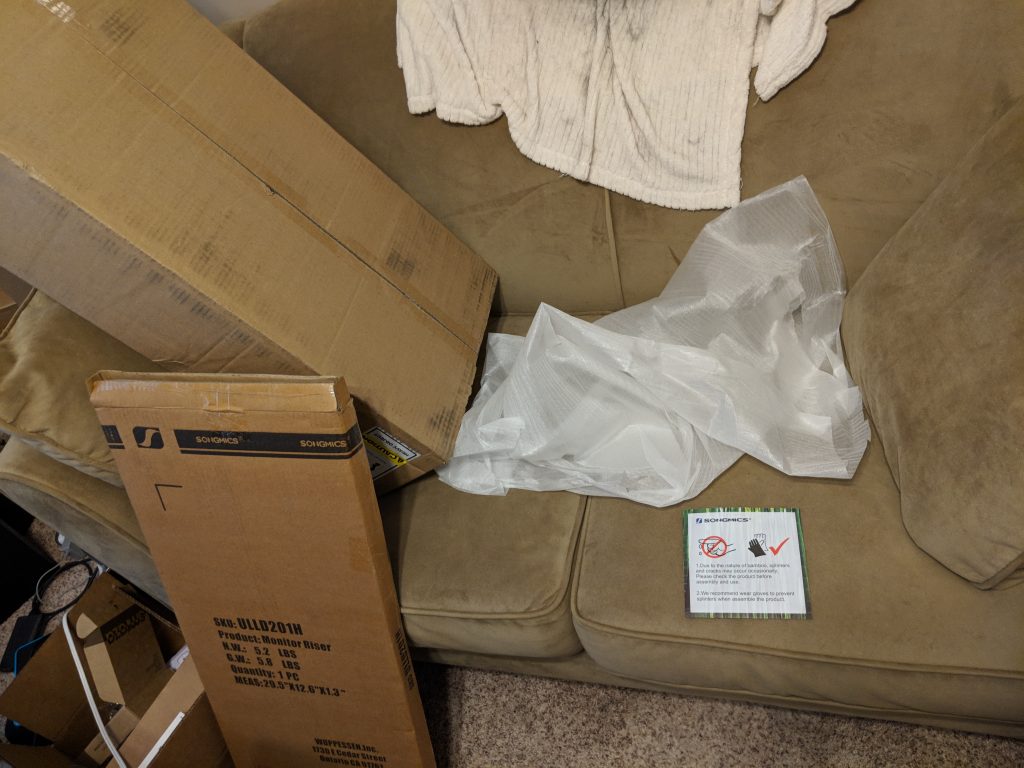 Plus, I managed to fill up most of my trashcan with the packing materials. As an added bonus, you get to see some of my hacking books! 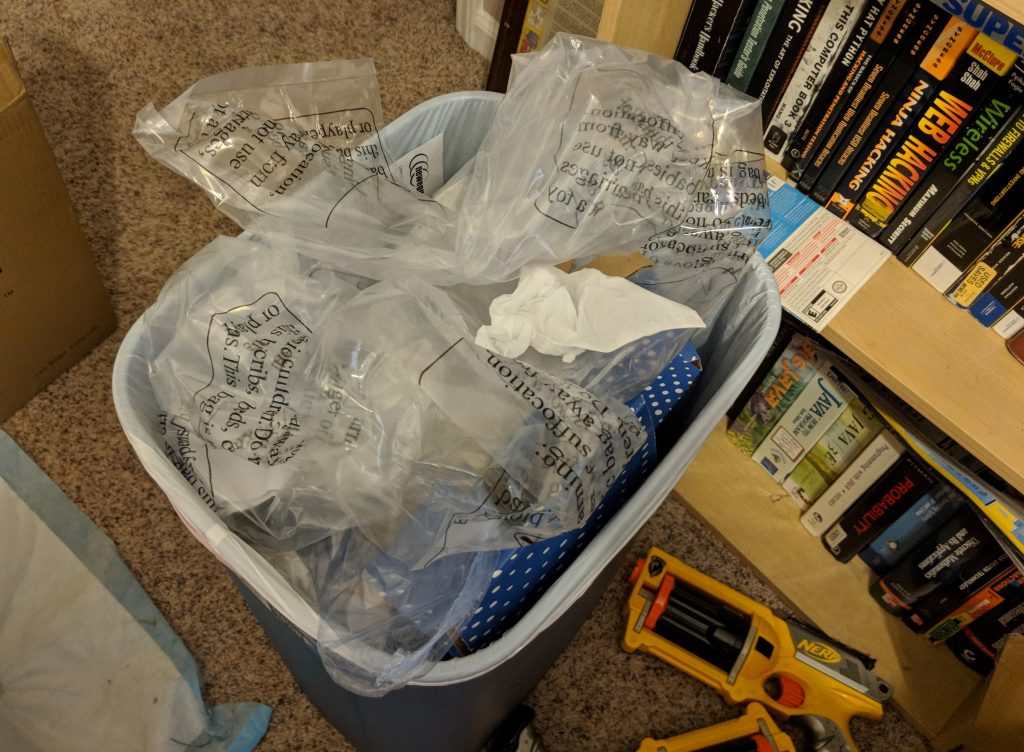 First, with everything mounted, I needed to fix monitor’s alignments. 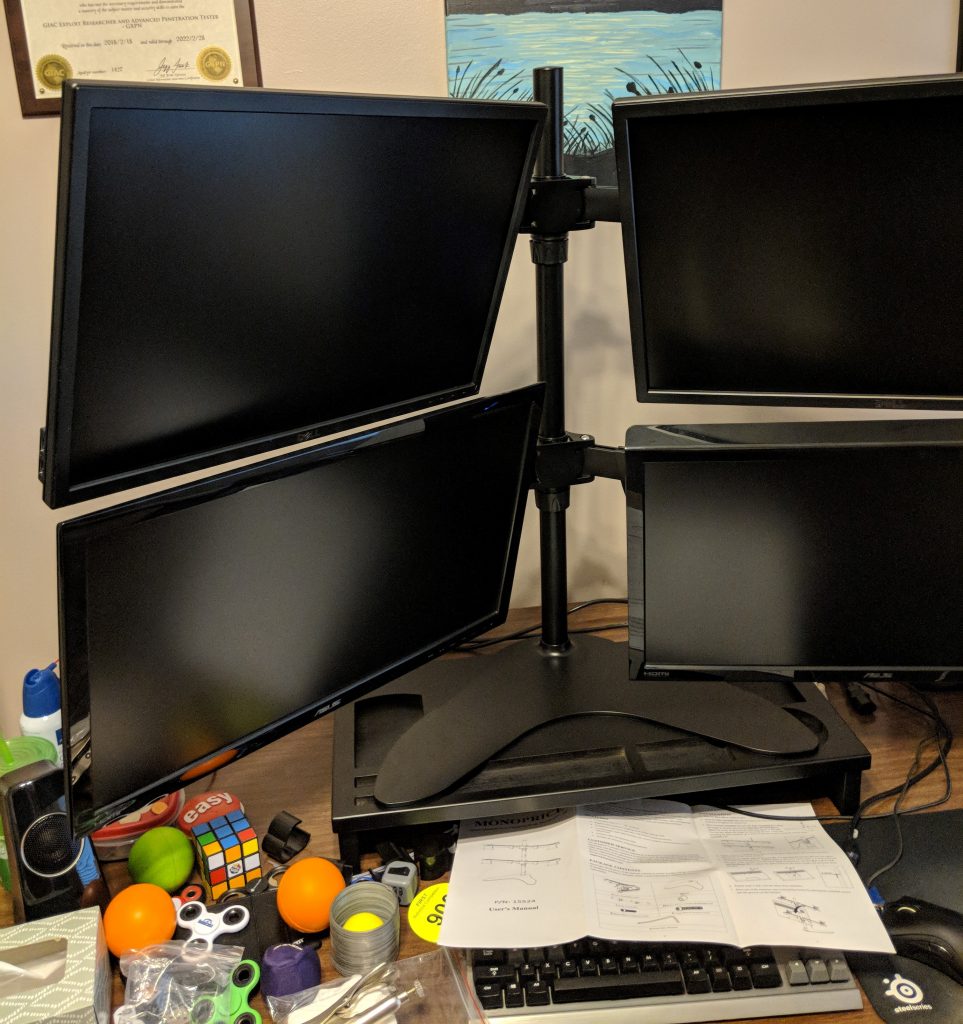 When I got them straightened out and plugged in, they look pretty good from where I sit. The top two monitors are a bit higher than eye level, but I plan on putting lesser used windows on them. 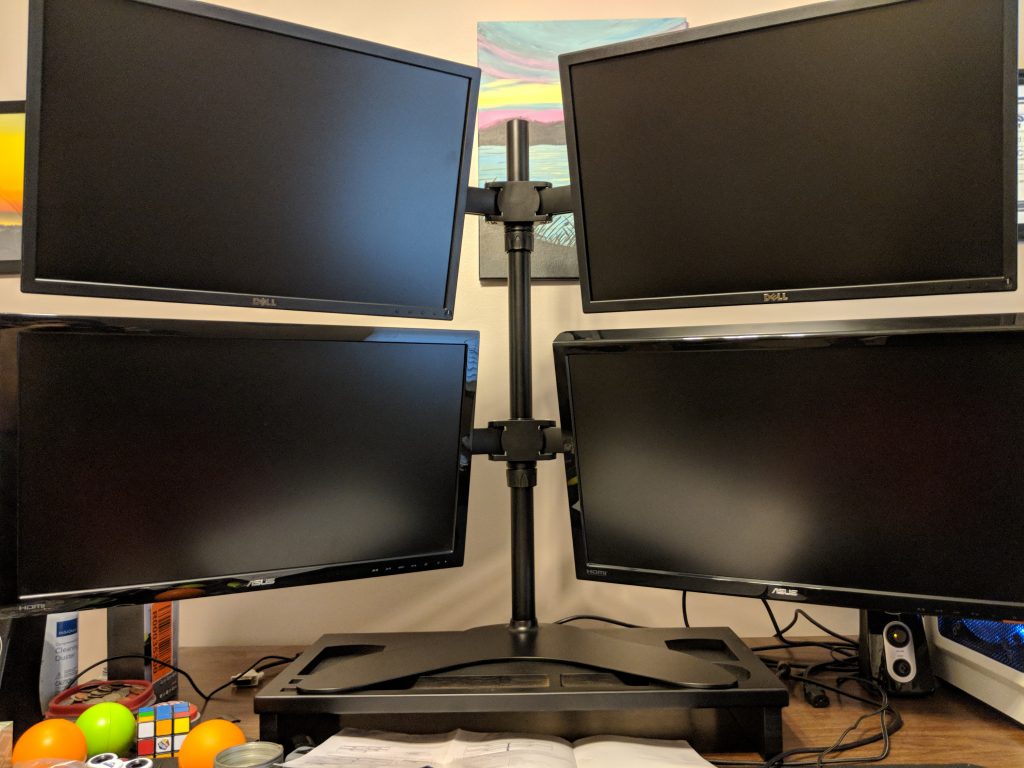 I ended up putting my work laptop under the riser, and connecting it to the KVM via some USB-C dongles. I will connect the left two monitors to my desktop, the top right monitor to my work laptop, and the bottom right monitor will alternate between the two (via different cables).

Plus, I made sure that everything worked with some parrot.live in my VMs! 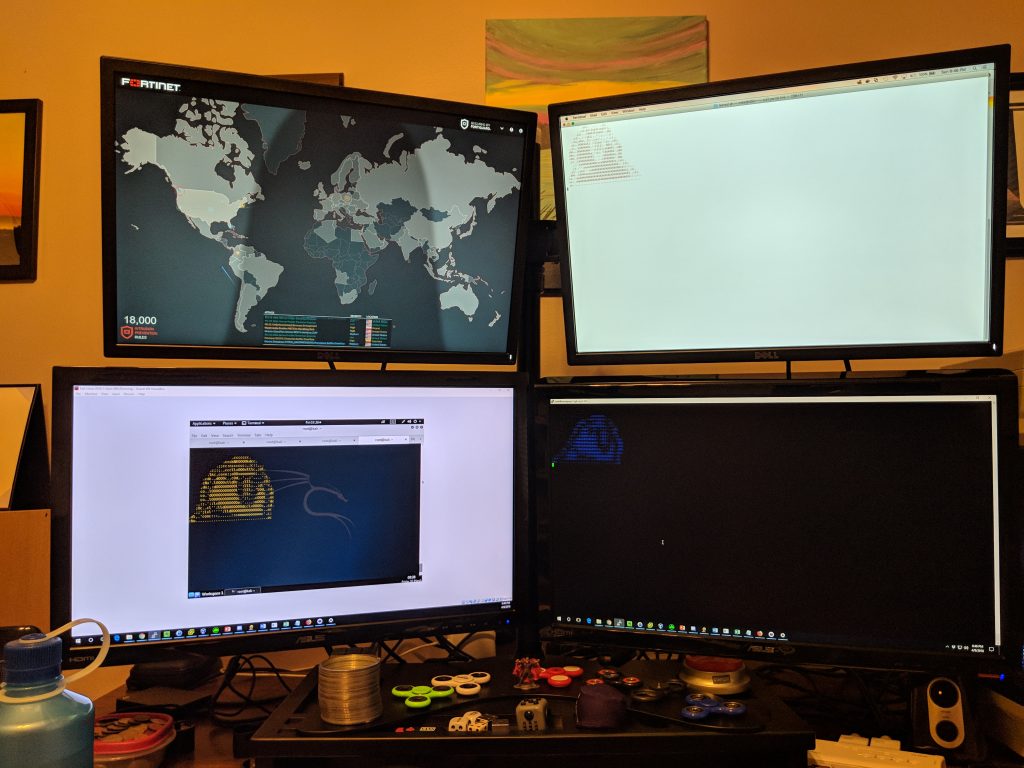 I actually put this setup together awhile ago, but am just now getting around to posting it.

This has made my life so much easier, and definitely gave my office new life. I also ended up running a VGA cable from my server to the top-right monitor, if I need to see anything.

I still probably need a different desk, but I have no idea what I would like that is big enough. If you have suggestions, then definitely reach out!